‘Return of the Vikings’ The Re-Imagining of JORVIK Viking Centre 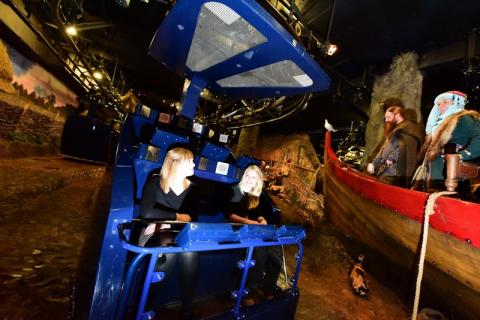 Severe flood damage to the JORVIK Viking Centre on 27 December 2015 led to a multi-million pound fundraising campaign to ‘re-imagine’ JORVIK, and create a modern heritage experience fit for the 21st century.

Alongside the in-house marketing team, we were tasked with launching the re-opening date of the new JORVIK Viking Centre. A key consideration was the fact that the centre would be closed for 16 months while it would be business as usual for all the other tourism businesses in York.  How could we make sure the JORVIK Viking Centre maintained its ‘voice’ throughout that time?

PR was a major feature of the campaign, together with traditional advertising and digital tactics.  Our strategy was to create content that would educate and inspire the audience to visit the re-imagined JORVIK Viking Centre, and we also incorporated the launch of JORVIK into the wider storytelling of the annual JORVIK Viking Festival.

Taking place during February Half Term the festival was one of the strongest opportunities to showcase updates to JORVIK at a time when many interested parties will be engaging with the wider brand.  We used the increased media interest generated by the events of JORVIK Viking Festival to pitch stories of the re-imagined JORVIK experience to visiting journalists creating opportunities to cross-promote these linked offers.

After the festival, from March to May, the focus shifted fully onto the reopening, the aim being to prompt the target audiences to pre-book their visit so that they could beat the queue and be one of the first to explore the new JORVIK.

Objective 1 - sell 70% of pre-booking slots for JORVIK Viking Centre over the two-week time period from 8-23 April (Easter Holidays): pre-booked tickets sold out by the beginning of March 2017. Demand was so great that additional sessions were made, resulting in 153% of pre-booked tickets being sold for the opening weekend of ‘Return of the Vikings’ and the reopening of JORVIK.

Objective 2 - reach at least 25 million people through PR opportunities from October 2016 to May 2017: The PR activity generated a reach of 33 million people across print and online media (excluding magazine, TV and Radio) - of that more than 15 million was generated from the festival and 18 million from the launch.

Objective 3 - welcome 50,000 visitors to the new centre over the first two months of re-opening (April-June): By May 2017 the attraction had had more than 62,000 visitors, which represents a 25% increase against the target, resulting in increases in admissions revenue and secondary spend, with the retail budget exceeded by the same 25% as admissions.

Overall the campaign has helped cement JORVIK back as one of the ‘must-see’ attractions for visitors to York. Not only do tangible results demonstrate the success of the campaign, so do the queues of engaged and excited visitors that persist in Coppergate confirming that the Vikings have truly returned to York.