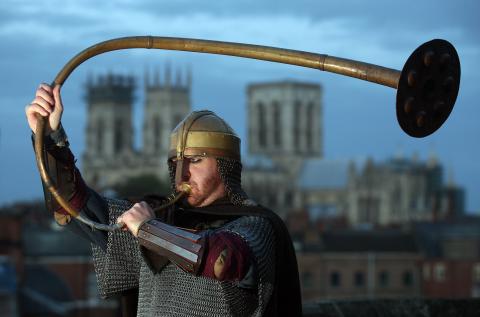 Working alongside the in-house team, our job was to offer strategic PR advice and provide creative PR support that would feed into all aspects of the marketing activity, help increase ticket sales and raise the profile of JORVIK generally, to encourage visits year-round, through the media and social media, nationally and internationally.

We started with a launch event became the light-hearted announcement that the countdown had started, so by the time of the Festival itself, journalists were clamouring for more information and interviews, with radio features in Canada, the USA and Australia, press coverage including India and Thailand, and film crews from Russia and Norway attending the Festival itself.  The story also played fantastically well for the local market, with the Festival receiving front page coverage in the Yorkshire Post and York Press six times.

This is what happened:

The 100-day countdown to the end of days started (Thursday 14 November) with a PR stunt when the Norse God Heimdallr blew his horn to signal the beginning of the end.  By the weekend the story had gone viral and the article on the Daily Mail website had been shared nearly 30,000 times.

Subsequent releases resulted in substantial media coverage with a reach of well over 100 million people.

The Festival website received over 120,000 visitors on 'Ragnarok Day'

The majority of Festival tickets were sold out a week before the events started thanks to the increased online presence and popularity of content offered.

The JORVIK Viking Festival isn’t the only thing we work on with York Archaeological Trust, we also do the PR for all their visitor attractions in The JORVIK Group: Barley Hall, JORVIK Viking Centre, DIG and the Richard III and Henry VII Experiences at Monk Bar and Micklegate Bar.  Plus Church Explorers! which takes place in July and August.  We have worked with the Trust since October 2013.

"Creative, engaged and organised. That’s how we would describe the team at Pyper.  When working on a large-scale project, like the JORVIK Viking Festival, you need to know that once briefed the agency will get what you are offering operationally and be able to showcase it in a creative and interesting way. With Pyper we had complete confidence that they could do both, and the results speak for themselves.  The process was collaborative, allowing us to react to opportunities quickly and reach the highest coverage possible.  All the team at The JORVIK Group enjoy working with Pyper and this relationship has helped strengthen an already strong brand.”