ChristmaSelfie booth in Coppergate with YO1 Radio 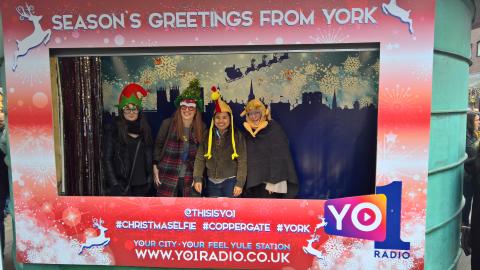 Finding space in York city centre during the annual St Nicholas Fayre is no mean task, but when retailers in the Coppergate Centre asked us to come up with something family friendly to help draw people in during the crucial Christmas shopping period, we were keen to put a vacant unit - a self-contained retail pod - back into use.  Ideally, we wanted to involve local charities, as we didn't want to create anything that would detract from the fabulous shops around.

We spoke to our friends at YO1 Radio, as they have superb connections with many local charities, and they came up with the idea of a ChristmaSelfie booth - and we loved it!  The unit had been entirely stripped out, so we redecorated it, Carla Ballatine at YO1 came up with the frame and backdrop design, and between us, we transformed the unit into a fully functional selfie booth, complete with a rack full of props.

YO1 Radio's charity contacts were perfect - the booth opened for 24 days from 1-24 December and raised thousands of pounds for local groups, many of which struggle to find venues to collect in the busy festive period.  The launch saw YO1 Radio broadcast live from the ChristmasElfie Booth.  Each charity helped publicise their fundraising day, inviting friends and supporters down into Coppergate, and the 'selfie' photographs were shared tens of thousands of times across all social media platforms.